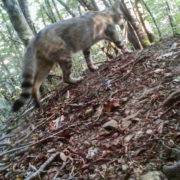 Paolo and Nicola have always been wolves photographer. They live in Liguria, in northern Italy, the region they love and their manly “hunting territory”. They are close friends but also rivals, their continuous challenge for the next best shot is never ending. Rivals until 2018, when in front of one of Paolo’s trail cameras passed an individual of European Wildcat (Felis sylvestris sylvestris), an animal that was considered extinct in that region since the beginning of last century.

They both had a sort of veneration for this absolutely mysterious and almost mythical animal. Their efforts were concentrated in the Trebbia river valley, among the wildest and most remote places in the region. They started looking for signs of presence of the species and they set more trail cameras. Other cats passed through the months. Each photo or video they recorded was sent to Dr. Stefano Anile, among the best experts of European wildcats, who validated their findings. Their monitoring is still going right now. The European wildcat is probably the most elusive mammal of italian forests. Solitary and of nocturnal habits, it is present on the territory with very low density and it is extremely difficult ot observe. The species is currently suffering due to hybridization and competition with the domestic cat. The two photographers want now to create a documentary and a photographic book to tell their discovery. The project will be realized through crowdfunding “FELIS – il primo film sul gatto sarvægo”. Now the wildcat is something more than a ghost in Ligurian forests.